THE EB-5 REGIONAL CENTER PROGRAM HAS BEEN EXTENDED THROUGH APRIL 28, 2017

The U.S. House of Representatives and Senate have passed the Continuing Resolution legislation to keep the government open through April 28, 2017. The legislation extends the EB-5 Regional Center Program for the duration of the time period with no changes to the current program policy. The investment amount is still “$500,000 for a targeted employment area” including many parts of New York City.

Donald Trump says he will investigate employers for potential visa abuse as part of his plan for his first 100 days in office. This comes after Mr. Trump released a short video where he stated, “I will direct the Department of Labor to investigate all abuses of visa programs that undercut the American worker.” Mr. Trump’s transition team has stated that they are developing a series of executive actions that the President-elect can take on day one that will advance “the core principle” of “putting America first.”

During his campaign for president, President-elect Donald J. Trump promised repeatedly to renegotiate or withdraw from the North American Free Trade Agreement (NAFTA), a 1993 free trade accord between Canada, Mexico, and the United States. Because the President is authorized by Congress to negotiate and enter into tariff and non-tariff agreements for limited periods, he is also allowed to withdraw from such trade agreements. Article 2205 of NAFTA allows any member of the agreement to withdraw from NAFTA 6 months after giving written notice to the other parties. It is generally accepted that only the U.S. President is authorized to give notice on behalf of the U.S. to terminate a trade agreement. Therefore, while litigation could ensue, the U.S. President does likely have the authority to unilaterally withdraw from NAFTA which would also likely mean the end of TN visas, a component of NAFTA. TN is a work visa category that allows citizens of Canada and Mexico to seek temporary employment in the U.S. if they are offered jobs that fall within a certain list of occupations. This would therefore mean that a withdrawal from NAFTA will likely mean that TN visas are no longer valid. Nevertheless, it is still speculative what the President-elect will actually do once in office. While campaigning, Mr. Trump stated that his primary goal was not to withdraw from NAFTA, but to renegotiate its terms.

The United States Department of Homeland Security has recently issued a final rule aimed at boosting job flexibility for certain skilled immigrant workers that will go into effect on January 17, 2017. Among other details, the rule will allow employers to submit additional H-1B portability petitions for foreign workers, will allow workers to keep their priority dates and essentially transfer them to new Form I-140 applications, and will contain a provision for temporary work authorization for certain foreign nationals who possess approved employment-based visa petitions but are stuck in the visa backlogs and are dealing with “compelling circumstances.”Lastly, the new provisions, which is does not work retroactively, will give high-skilled workers certain extended grace periods to seek new jobs. Below are these grace period provisions:

While Mr. Trump has stated he plans on deporting 2 million to 3 million unauthorized immigrants with criminal records, there are several obstacles he will likely face. First, such number is likely inflated since President-elect Trump is probably relying on a 2013 fiscal year report by U.S. Immigration and Customs Enforcement (ICE) which estimated 1.9 million “removable criminal aliens” in the United States. However, “removable criminal aliens” generally refers to any non-citizen convicted of a crime, which can range from murder to stealing a pack of gum at a local grocery store. This number therefore likely goes beyond the number of unauthorized immigrants in the U.S. that Mr. Trump mainly wishes to target and also includes green card holders and visa recipients. According to the Migration Policy Institute, a nonpartisan research group, there are only about 690,000 unauthorized immigrants who have been convicted of felonies or serious misdemeanors. Thus, since the pool of 2-3 million immigrants with criminal records that Mr. Trump wishes to deport encompasses some immigrants who in fact hold some kind of lawful immigration status, Mr. Trump will likely face due process obstacles when attempting to deport them. This is because most non-citizens, even unauthorized immigrants, who have committed crimes are entitled to a hearing before a judge prior to being deported. As such, the massive backlog in immigration courts will be a major obstacle for Mr. Trump’s plans. As of October 2016, there were 521,676 pending cases in immigration court according to the Transactional Records Access Clearinghouse at Syracuse University. Another issue will be locating immigrants who have committed crimes given the fact that several cities, including New York, have continuously vowed to remain as “sanctuaries” for immigrants. This generally means that such cities will not honor detainer requests by the U.S. Immigration and Customs Enforcement (ICE), who are in charge of removing individuals. Lastly, it is unclear that ICE has the manpower to find and deport millions of these targeted immigrants.

Mayor Bill de Blasio has drawn his own hard lines on immigration by vowing to mount a legal challenge to protect immigrant families threatened with deportation, to prevent an aggressive stop-and-frisk policing policy from ever returning to New York, and to protect Muslims if the federal government tries to create a registry of the nation’s Muslims. Governor Andrew M. Cuomo has also echoed a similar message by stating that he would create a new unit of the State Police to investigate hate crimes, move to expand state human rights laws, and seek new funds to provide legal representation to immigrants.

Chicago is the latest city to pledge its commitment to remain a sanctuary for immigrants despite President-elect Donald Trump’s plans to deport or jail 2 to 3 million people who are in the country illegally. Chicago’s sanctuary status includes a policy against complying with U.S. Immigration and Customs Enforcement requests to hand over people in city custody whose immigration status is suspect, unless the person is determined to be a danger to the public. Chicago’s policy also includes preventing law enforcement officers from asking city residents about their immigration status during routine interaction or traffic stops. This comes even after Mr. Trump has pledged to ensure that federal funding be taken away from cities that circumvent immigration laws. Chicago is just the latest city to vow to remain a sanctuary as mayors of New York and Los Angeles have also reiterated their cities’ commitments since the presidential election.

THE FUTURE FOR IMMIGRANTS WHO ARRIVED IN THE U.S. AS CHILDREN

While President-elect Donald J. Trump previously promised to terminate President Barack Obama’s program that protects more than 740,000 young, undocumented immigrants known as Deferred Action for Childhood Arrivals (DACA), he recently indicated that he may seek to work something out” for this class of young, undocumented immigrats often referred to as “DREAMers.” This was seen in a Time Magazine article regarding Mr. Trump’s designation as Person of the Year where he stated, “we’re going to work something out that’s going to make people happy and proud. . . They got brought here at a very young age, they’ve worked here, they’ve gone to school here. Some were good students. Some have wonderful jobs. And they’re in never-never land because they don’t know what’s going to happen.” The 2012 DACA initiative is a deferred deportation program for immigrants who entered the U.S. as children. Those who qualify are also able to receive renewable work permit, and over 741,500 people have benefited from the program. Most recently, Senator Dick Durbin announced a bipartisan legislation, co-sponsored by Senator Lindsey Graham, on the Senate floor that would provide work authorization and temporary relief from removal to young unauthorized immigrants who were brought to the U.S. as children. The proposed bill is known as the Bar Removal of Individuals who Dream and Grow our Economy.

Three Republican lawmakers have urged President Obama to use his constitutional authority to pardon young people who were brought to the U.S. without authorization as children, known as DREAMers, and now fear being deported under the incoming Donald Trump administration. Nearly 1 million of these DREAMers signed up for the Deferred Action for Childhood Arrivals program that President Obama made possible through a June 2012 Executive Action that granted them work authorization and shielded them from deportation. These DREAMers now fear deportation after having exposed their personal information to the federal government, including their fingerprints and home addresses. These lawmakers have urged President Obama to take action before the incoming administration takes office by citing that some DREAMers have taken their own lives as a result of the unknown circumstances they face. Mr. Trump’s campaign promise to reverse President Obama’s administrative actions on his first day in office has subjected nearly one million DREAMers into fear, stress, and psychological issues such as depression, anxiety, and an increased risk of suicide. These lawmakers have deemed this “literally a matter of life and death.”

Donald J. Trump has officially nominated retired General John Kelly to serve as secretary of the U.S. Department of Homeland Security after praising the former U.S. Marine Corps General for his decades of military service and deep commitment to fighting the terrorism threat inside the nation’s borders. The selection becomes the third military general chosen for the Trump administration, following the selection of Lieutenant General Michael Flynn as National Security Adviser, as well as former U.S. Marine Corps General James Mattis as Defense Secretary. Mr. Trump has stated that General Kelly is the right person to spearhead the “urgent mission” of halting illegal immigration, in addition to securing the nation’s borders, streamlining the Transportation Security Administration and improving coordination between the country’s intelligence and law enforcement agencies.

According to the Department of Homeland Security Office of Inspector General, the U.S. Citizenship and Immigration Services (USCIS) handed out 19,000 green cards over the past 3 years that either had incorrect information or were issued duplicate. A report by the Office of Inspector General (OIG) identified 12 incidents between July 2013 and May 2016, where USCIS issued incorrect green cards, and where the number of incorrect cards ranged from 19 to 5,434 on each of those 12 incidents. Additionally, USCIS issued more than 5,400 duplicates in June 2015, alone and sent more than 6,200 duplicate cards to customers over the past year. The report attributed much of the problems to USCIS’s Electronic Immigration System, the agency’s automated system for processing immigration benefits, which has been plagued by errors and cost overruns for years.

Nawlaw has observed a surge in foreign nationals applying for greencards and greencard holders applying for naturalization since the results of the recent election. However, we believe this will result in USCIS processing delays, and will keep our readers posted.

Nawlaw has observed that the United States Citizenship and Immigration Services (USCIS) is still very hostile to start-up companies because of their size and is likely to challenge H-1B petitions in many instances. This is based on the Neufeld Memo of October 31, 2008, which states that there is a presumption of fraud involving U.S. petitioners with a gross annual income of less than $10 million which employ 25 employees or less whose business was established within the last 10 years. 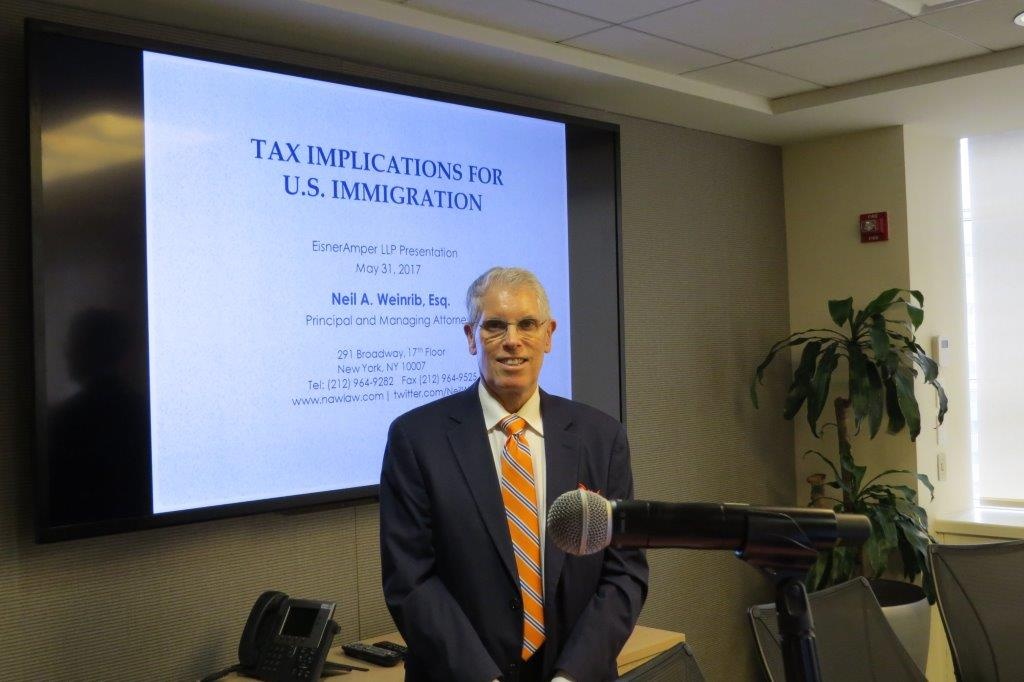 Neil A. Weinrib in the News

Neil A. Weinrib in the News